Barron will be in attendance, we hope you’ll stop by and see this amazing show! 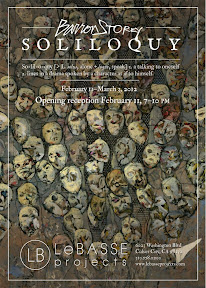 While we weren’t able to get a full catalog produced in time for tonight’s opening, the catalog is officially ready to order here: http://www.blurb.com/bookstore/detail/2963530

Years of “talking to myself” in my personal journals evolved a graphic language that has allowed me to capture subtle, elusive thoughts and experiences. Often cryptic to others, sometimes even to me—this language has become a habit, a regular journey through variations in process and ideas. These journals are sensitive to daily occurrences, transitive moods, chance interactions with materials and emotional dynamics; drawings in them often begin with abstract mark making. Images “found” within these marks often reveal intriguing thoughts that lie below the threshold of conscious awareness—a Rorschach-like effect that I have used extensively. Soliloquy represents an exploring of my journal language on a different scale and like the images in the journals, continuity is often sacrificed, subjects change abruptly and meanings evolve.

One can easily get lost in self referential expression and at some point in my solitary creation, another voice appeared—an imaginary one. A companion voice, able to say what was not being said otherwise. It came from a character I call Fool. I’ve dealt with imaginary “friends” since childhood when I delighted in a character called Froggy the Gremlin who always did his rascally best to upset guests on a children’s show. I’ve been imitating Froggy’s gravelly, insinuating voice and mischievous laugh all my life. During my stint in the theater as a mature person I fell in love with Shakespeare and relished the Fool who had many of Shakespeare’s best lines in “King Lear”. Like Lear, I needed another opinion, and a chance to be amused by my own.

In this current group of large, off the page works I owe a debt of gratitude to Fool’s sarcasm—but, even more to those who supported my effort. The opportunity to do this show came at a troubled time in my life and I could not have seen it through without their encouragement.