TAROT: An Artists' Vision of the Future

What happens when you ask a group of 10 internationally-renowned artists to personally interpret the Tarot?
You get 10 visually stunning, emotionally challenging views on how each artist sees the future based on his interpretation of each card in combination with his creative association process.

Artists from all over the world participated in this project: 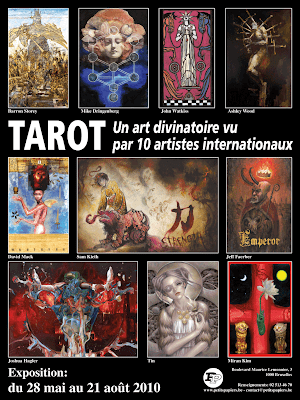 Mike Dringenberg: Stood at the craddle of Neil Gaiman' Sandman series, Mike's superb paintings rival the grand classics of Symbolism.
Jeff Faerber: A young illustrator and student of Barron Storey, Jeff created 5 earthtone cards combined with very personal and lighthearted prose.
Joshua Hagler: Rising artistic San Fransisco talent, represented by art galleries in the US and Europe, Joshua's large oil paintings reflect his philosophical views on the world we live in.
Sam Kieth: Like Mike Dringenberg, gave shape to the Sandman world. Sam has stepped out of comics and illustrations until this project came along,although he still wants us to burn his art at the opening of the show.
Miran Kim: Surprised the established comic world with her strong debut. Her cards lean towards the immensly popular low-brow art, colorful and playful.
David Mack: Impacted the world of comics by completely changing the conventions of the medium and fully exploiting mixed media techniques into the story. World-famous for his series Kabuki and atypical interpretation of superhero Daredevil.
Barron Storey: A living legend and genius of illustration, teacher of giants like George Pratt and Kent Williams. Asked by Neil Gaiman to give his interpretation of Sandman character Despair. Barron created 20 stunning pieces of art for this show.
Tin: Using his incredibly detailed steampunk creations as a backdrop, Tin paints women who find themselves interacting with beguiling machines, and sometimes disturbingly adorable creatures as if doing so is the most natural thing in the world.
John Watkiss: Only UK resident participating painter, illustrator and comic artist, created 5 hyper-stylized cards resembling stainded glass creations that could fit straight into any European historical building.
Ashley Wood: The top talent from down-under. After more then 30 months working with Ash on this project, we finally managed to get one card created. But what a card !!! This large stunner reflects the best of Ash's art.

Brussels will host the full Tarot exhibition while we managed also to mount a group exhibition (non-Tarot) with the same artists in Paris.
Artists present during the openings and signing sessions:
Brussels – Tarot: An Artists' Vision of the Future
27 May–21 August
Thursday 27th May, 18.00 hrs.
Opening of Tarot art exhibition (including live Tarot reading performance and burning of Sam Kieth's art)
Petits Papiers
1 Place Fontainas
1000 Brussels

Exhibition organised by Graphicnovelart & Petits Papiers
Posted by Admin at 10:42 AM