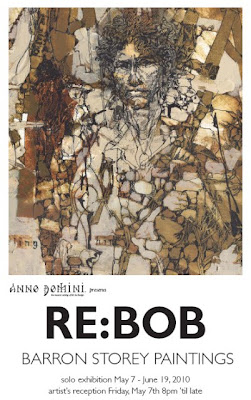 A reminder that Barron's show RE: Bob opens tonight at Anno Domini.
FREE show posters will be available at the event.
Hope to see you there!
I've been referencing Bob Dylan's lyrics in my journal for many years. They are words that I have been living by for most of my life. I've often taken liberties with them, finding in them a lens through which to make sense of my personal life as well as life in general. Dylan is an oracle, for me and many others.
These works are a sharing and a tribute, offered with profound respect.
~ Barron Storey, San Francisco, 2010
Artist's Reception: May 7, 2010, 8pm 'til late
Special live performances by Travis Bilenski (aka Slow Trucks), Chris Burkhardt, Troy Curtis, DeatHat, Lisa Dewey, and Benjamin Henderson throughout the night.
Exhibit on view through June 19, 2010
Anno Domini
366 So. First Street
San Jose, CA 95113
www.galleryAD.com
Posted by Admin at 10:58 AM